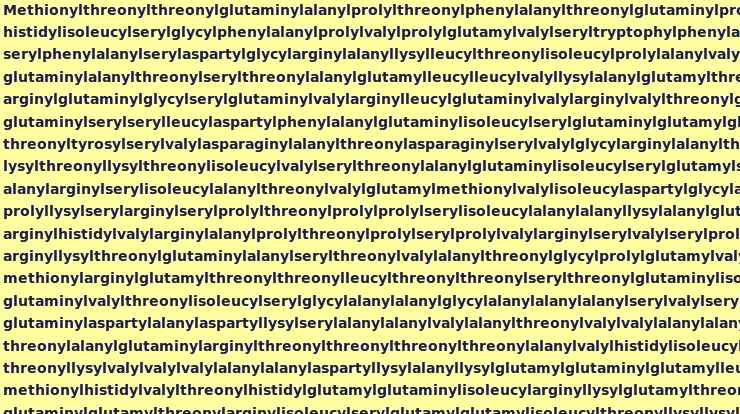 The longest word in the English language is a whisker under 190,000 letters long and would take over an hour to say out loud. Excuse me if I don’t reproduce it, but you’ll find it written out in it’s full glory here.

It’s more commonly known as the protein titin (or connectin) found in muscle tissues, and the word comes from the chemicals which make it up. The protein itself is described as a “giant” because it’s bigger than one-thousandth of a millimetre long.

The second longest word clocks in at a mere 1,909 letters and is the chemical name for an enzyme of E. coli. Again, you’ll have to check that one out for yourself.

The longest word ever to appear in English literate is an order of magnitude shorter with a mere 182 letters. Lopadotemachoselachogaleokranioleipsanodrimhypotrimmatosilphioparaomelitokatakechymenokichlepikossyphophattoperisteralektryonoptekephalliokigklopeleiolagoiosiraiobaphetraganopterygon is a fictional dish mentioned in Aristophanes’ comedy Assemblywomen.

Technically, it’s a Greek word, but it’s been translated into “oysters-saltfish-skate-sharks’-heads-left-over-vinegar-dressing-laserpitium-leek-with-honey-sauce-thrush-blackbird-pigeon-dove-roast-cock’s-brains-wagtail-cushat-hare-stewed-in-new-wine-gristle-of-veal-pullet’s-wings”. What wine would one serve with that?

Now we move into saner territory with pneumonoultramicroscopicsilicovolcanoconiosis, the longest word to appear in an English dictionary with a mere 45 letters. In 1935, it was coined by the president of the National Puzzlers’ League — an organisation focused on word games and puzzles — as a synonym for the lung disease silicosis. Following campaigns by NPL members, if first appeared in the 1939 supplement to the Merriam-Webster New International Dictionary, and subsequently in the Oxford English Dictionary.

Supercalifragilisticexpialidocious comes in next at 34 letters. Many people think it originated in the 1964 Disney musical Mary Poppins, but it goes back decades before that film came out. In 1965, Disney won lawsuit alleging they infringed the copyright of a 1949 song called “Supercalafajalistickespeealadojus” by producing affidavits showing that variants of the word were known for many years before 1949.

Clocking in at number seven, and the longest unchallenged non-technical word, is my old favourite floccinaucinihilipilification, which simply means “the act of considering something to be not at all important or useful.” Like this blog post, for example.

Right, now I’m off to Taumatawhakatangihangakoauauotamateaturipukakapikimaungahoronukupokaiwhenuakitanatahu, the longest place name in English (85 letters), a hill south of Waipukurau. The rough translation is “The summit where Tamatea, the man with the big knees, the slider, climber of mountains, the land-swallower who travelled about, played his kōauau (flute) to his loved one”.