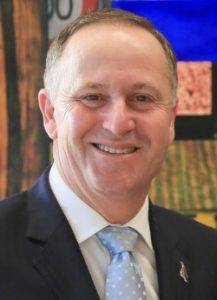 Whatever you might think of John Key and his performance as Prime Minister, there’s one quality he has in abundance; a gut instinct for the rise and fall (and sometimes crash) of markets. And that’s why I believe he’s going now.

There’s an old comedian’s mantra about leaving ‘em laughing and begging for more. That’s what Key is doing. Getting out while the going’s good. Before the shit hits the fan.

Key began his working life as an auditor, moved on to project management, then, quite literally, talked himself into a job as a foreign exchange trader.

Soon after Roger Douglas and David Lange had floated the dollar in 1985, they [Key and his wife] were watching TV in their flat. “It was a day in the life of a foreign exchange trader,” remembers Key. “I said to Bronagh, I could do that!”

That was enough. Key started writing to banks.

He quickly developed an instinct for opportunity.

“… I turned on car radio and Radio New Zealand was saying ‘Roger Douglas is going to be sacked at 2pm this afternoon’,” explains Key.

He went back to the dealing room and it was really, really quiet. “I said to them ‘Roger Douglas is going to be sacked, the Kiwi’s going to collapse! What position have we got?’ They all looked at me, ‘nah, no, no … ‘

“So I went out and sold this massive amount.

He draws his breath in through his teeth at the memory of the victory. “It was mayhem after that – we were there to about 9 o’clock. But I knew I’d made a lot … it was millions. I remember Gavin coming over and asking ‘is it a half million?’ ‘No it’s way more than that.’ I don’t remember if it was one, two or three million.

“It was a record for what I’d made, and certainly the firm did very, very well.”

Key’s strategy was to sell New Zealand dollars, which were relatively highly priced, before the rest of the world realised the impact of Douglas’ sacking. Then, when they did catch on, and the dollar fell, he could – and did – buy them back at a cheaper rate. As he says, “It’s a bit like housing. If you think you can sell a house and buy it back a month later at a cheaper price – you sell high and buy low.”

By1995, he was global head of foreign exchange at Merrill Lynch in London, making around NZ$5 million a year in salary and bonuses.

In 1998, when Merrill Lynch suffered heavy losses from the Russian debt crisis, Key was told to sack hundreds of staff and did so with his usual cheerfulness, earning himself the nickname “the smiling assassin”.

Here, from the same article above, is the man who took him to Merrill Lynch in London’s assessment:

“His career’s a good lesson in life when it comes to risk management. Most people don’t know what risk versus reward – or return – is about. John does. One weighs up the odds, balances the situation, measures the people, balances the evidence. John Key totally understands his environment and the outcomes. He transcends the market, geography and people.”

We’re in a post-Brexit, pre-Trump world. The impact of the UK’s decision to leave the EU hasn’t really bitten yet, and Trump doesn’t become president until January 2017. After both elections, the markets dipped a little then bounced back, but I’m sure Key’s gut is telling him this phoney war can’t continue indefinitely.

Then there’s the local situation. When he came to power in 2008, government debt stood at $10.3 billion. Today it’s $61.9 billion. Even as a net of GDP, it’s still five times what it was eight years ago:

If there is a crunch is coming, it’s a good time to get out. And from a CV perspective, it’s a win-win for Key. If the economy continues its stellar growth, he can sit back and say, “See, look what I started.” And if, it tanks, he can say, “Nothing to do with me.” Or, what I think’s likely, “Yeah, I saw that coming.”

So go out on a high, leave ‘em laughing and begging for more. Someone else can clean up the mess.