A fascinating interview with J K Rowling (AKA Robert Galbraith) in The Guardian.

… the first publisher ever to turn down Harry [Potter] wrote Robert [Galbraith] his rudest rejection. So I think it’s safe to say I will never write for them. They clearly don’t like me, in whatever way I present myself. [Laughs]

Some people would assume that you’re sitting around feeling simply marvellous and shining your baubles. But I remember, a week after I got my American deal, 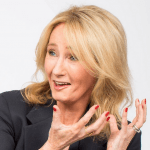 which got me a lot of press, one of my very best girlfriends rang me and said, “I thought you’d sound so elated.” From the outside, I’m sure everything looked amazing. But in my flat, where I was still a single mum and I didn’t know who to call to do my hair, everything felt phenomenally overwhelming. For the first time in my life I could buy a house, which meant security for my daughter and me, but I now felt: “The next book can’t possibly live up to this.” So I managed to turn this amazing triumph into tragedy, in the space of about five days.

J K Rowling on the birth of Harry Potter: 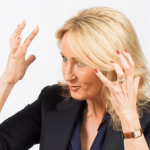 It was like an explosion of colour, and I could see lots of detail about the world. Of course the whole seven-book plot didn’t come at once, but the basic premises were there.