The derivation of well-known words and phrases.

Many familiar English words and phrases have interesting derivations, and because Britain was once a great sea power, a surprising number come from the days of sailing ships …

footloose
The base of a sail was its “foot”. If it wasn’t secured and ended up dancing in the wind, it was said to be footloose.

by and large
By means “into the wind” and large means “with the wind”, so a good ship would be said to handle well, by and large. 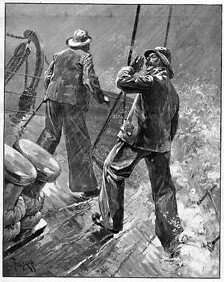 wind and spray from pounding waves. Not the best place to be, so anyone stationed was said to be under the weather.

making leeway
Opposite the “weather” side was the “lee” – the side sheltered from the wind. So a “lee shore” was one downwind of the ship, onto which a vessel could be driven if it have sufficient “leeway.”

windfall
A “windfall” was a sudden, unexpected rush of wind that gave a ship more leeway.

to be taken aback
A sudden shift in the wind that reversed direction and pressed the sails back against the mast, forcing the ship astern.

three sheets to the wind
“Sheets” were the rope lines used to trim the sails. If several of them came loose, (“went to the wind”), they’d cause the ship to rock about drunkenly.

over a barrel
Flogging was a common punishment for shipboard misdemeanours. The victim was often tied to a grating, a mast, or over the barrel of a cannon.

as the crow flies
Early navigation was often a hit and miss affair, so when unsure of his position, a captain would release a caged crow – which would head straight for the nearest land. By observing its flight from the highest lookout on the ship, (the crow’s nest), they would at least know the direction of the shore. 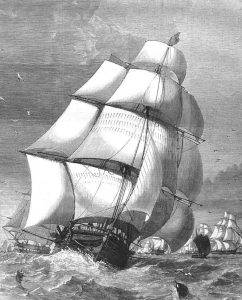 knowing the ropes
There were miles of cordage (or rope) on a sailing ship and a good seaman knew the purpose of every one.

toe the line
When called to muster, the crew would stand to attention with their toes touching a seam on the deck, thus toeing the line.

slush fund
Salted meat, part of the ship’s provisions, was stored in barrels. When empty, they fatty sides of the barrels were scraped clean and the resulting slurry of “slush” was sold off by the ship’s cook when ashore.

no great shakes
Room was precious on a ship, so when barrels were empty, they were dismantled. The pieces, called “shakes”, took up less storage space, but they had little value.

pipe down
The bosun pipe – a type of whistle – was used to pass orders to the crew. They were piped to meals or to all hands on deck. When a watch went off-duty, they were “piped down”.

first rate
Ships were rated by the number of heavy cannon they carried. A ship of 100 or more guns was a “first rate” line-of-battle ship. Second rates carried 90 to 98 guns, third rates 64 to 89, and so on.

grog
Admiral Edward Vernon was known as “Old Grog” after the grogram coat he habitually wore. In 1740, he ordered that sailors’ rum – traditionally served straight – be watered down. The mixture became known as “grog”.

start with a clean slate
The watch keeper would record speeds, distances, headings and tacks on a slate tablet. If there was nothing requiring their attention, the slate would be wiped clean before being passed on to the next watch.

above board
Anything on or above the open deck in plain view.

a square meal
In good weather, the crew were served meals on square wooden platters.

at loggerheads
Loggerheads were long-handled tools with an iron ball on one end. When heated, they were used to seal the pitch in deck seams. They also made handy weapons for quarrelling seamen.

the devil to pay
“Paying” was the term used for caulking the seams between planks, typically with pitch or tar. The “devil” was a particularly awkward seam.

scuttlebutt
A scuttlebutt was a butt with a scuttle – a keg of drinking water with a hole cut in it. Sailors would gather round it to drink and exchange gossip. 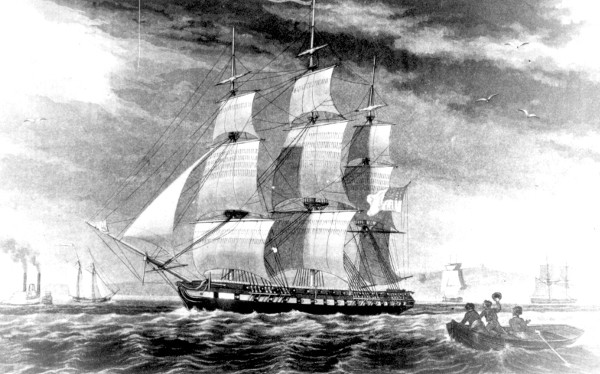